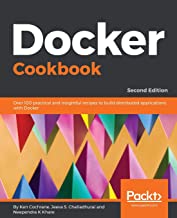 One of the things that I have always wanted to do was write a book. When I was at Docker I had a few offers from publishers to write a book, and I even started writing one called the Docker guidebook and you can find it on Github. Since Docker was growing so fast and I was spending so much time working that I didn’t have a lot of free time to write a book. I decided instead to take my free time and spend it with my family. That was a pretty easy decision, and I would make it again if I had to with no regrets.

My dream of writing a book was still there, so when I had another opportunity to do it, I decided I would do what it would take to accomplish my goal. In July of 2019, I was approached by Packt Publishing to help them with a problem they had. They had a second edition of a book they were trying to finish up and the author that was hired to work on it wasn’t able to dedicate the time to finish it. They wanted to know if I could take over and finish the book. The problem was that the book was already behind schedule, and they wanted to get the whole thing written and published in the next 30 days. That was a tall task, but to make it even more difficult, I was planning on going on vacation with my family for 2 weeks of that time. That meant that if I accepted that challenge that I would need to do everything in the next 2 weeks. I talked it over with my wife and we decided to go for it.

Once I had the contract signed, for the next two weeks I woke up really early before work, and then again after I got home from work as well as on the weekends to rewrite most of the existing chapters and also write a brand new chapter from scratch. I had never written a book before so I was learning as I was going, and even though it was a lot of work, it was fun. The most annoying part of writing the book was creating the code examples with screenshots. It was hard getting them to look consistent, and making sure they are 100% accurate. As I finished a chapter I was able to submit it to the editors via their web portal, and since they were located in India I would usually have the feedback in my queue the next morning. You can tell Packt has done this before because they have a very efficient process. It isn’t perfect but it seems like they committed to working at it until it gets there.

I was able to successfully finish all of my chapters to the editors before I went on vacation, and I still took my laptop with me so that I could handle any issues that might pop up while I was gone. Luckily most of the things that popped up were pretty simple and I only had to work a few hours the whole vacation, and I normally did it early in the morning before anyone else woke up, so it didn’t interfere with any of our plans. After a little while, the edit requests stopped coming in and then everything went silent. Out of nowhere, I got an email congratulating me that my final draft was accepted and it was finished. It went on sale on Amazon the next day, and with that my whirlwind month of writing a book was finished. I was now a published author, and it felt good.

If you are interested in buying a copy it is available in print or ebook at a number of places including Amazon.

Some people have asked me if I would write a book again, and I think I would if it was the right project. You don’t make a lot of money writing books, so I would really need to love the topic and feel that it would be helping people before I commit the time and effort.

I wanted to give you an update on how the book is doing. If you want to get rich then writing a book isn’t for you. Very few authors make enough money selling books to do it full time. Most people are like me, are doing it in their spare time. I didn’t want to write a book for the money, I did it to cross off an item on my bucket list, and the money was just an added bonus. It is also good for the resume, not many people can say they are a published author on a given topic. If you are applying for a job and it comes down between you and someone else, and they see that you wrote a book on a topic related to an area they are interested in, it might be enough to have them pick you. On its own, it probably won’t win you the job, but it is a nice bonus.

I still haven’t sold enough books to cover my advance yet, but I’m hoping the next quarter will change that. If you want to help, please buy a book, it is still very relevant, and hasn’t gotten out of date yet :)